Have you ever wondered what churches are for and why people go to church? What does it really mean to "get baptized" to "take communion" and to "dedicate babies"? Or perhaps you have heard someone ask, "Do I need to go to church? Why can't I just worship God in nature or in my home"? What would you answer? Whether you attend church services regularly or not, this course will interest you. Series were written by Robert and Evelyn Bolton.

Years ago in mainland China, some Chinese Christians were discussing various churches and their view on water baptism. One lay leader expressed it this way, “Some groups believe in ‘Big Wash.’ Others hold to ‘Little Wash.’ And the rest have ‘No Wash.’” 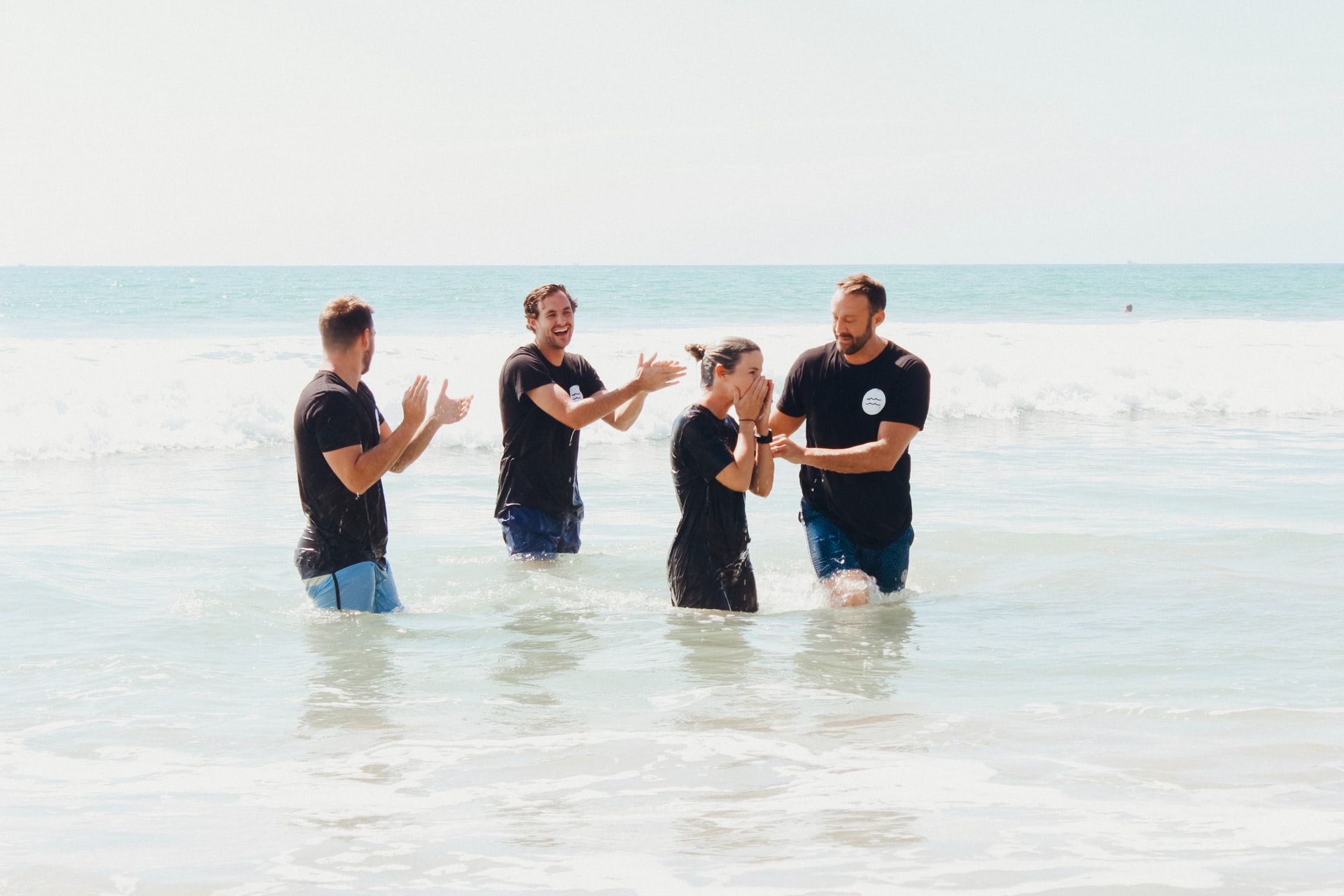 The speaker meant that those in the “No Wash” group do not practice any form of the baptismal ceremony. To them, it is not essential.

The “Little Wash” group represents the churches that practice baptism by sprinkling drops of water as a symbol of water baptism. Most of these churches also use colorful and impressive rituals.

“Big Wash” groups practice baptism by immersion, putting the candidates under the water. Pentecostal or full gospel churches are in this group. Before being baptized, however, a person should understand the meaning of baptism and why it is recognized as an ordinance of the church.

Mary has not yet been baptized in water, although she has seen others being baptized. Timothy, who has already taken the step, is encouraging her to do the same.

“I don’t understand why we have to be put under the water. I wouldn’t want people to see me come up with my hair all wet!”

“They won’t be looking at that,” encourages Timothy. “Haven’t you noticed how people seem to glow with joy after they are baptized? That is because they have identified themselves with the Lord Jesus. All the Christians rejoice with them.”

“I do want to obey the Lord,” agrees Mary at last. “But I still don’t fully understand.”

“After we attend the class for baptismal candidates, you will,” Timothy assures her. “And you will be eager to be baptized too!”

Jesus instituted two ordinances—water baptism and communion, both of which portray great Bible truths in visual form. An ordinance is an established rule or an authoritative decree. Church ordinances are based on the authority of God’s Word. In this lesson, we will look at the first of these ordinances, water baptism.

Water baptism gives a two-fold picture. The first is that of Christ dying in our place.

The convert going down into the water pictures Christ dying for our sins. His or her being momentarily under the water speaks of Christ being buried. Then when he or she is lifted out of the water this demonstrates Christ being raised to life. Paul writes, “Because of our sins he was given over to die, and he was raised to life to put us right with God” (Romans 4:25).

Baptism is also a picture of our deliverance from sin and union with Christ. The believer baptized in water illustrates the following truths:

He or she is “put to death with Christ” (Romans 6:6). Galatians 2:20 also refers to the old nature being crucified with Christ.

He or she is “buried with Christ” (Colossians 2:12). The believer being baptized is attending, in a spiritual sense, his or her funeral! The old self-life must die and be buried.

Christian baptism is summarized in these words.

“You were baptized into union with Christ, and now you are clothed so to speak, with the life of Christ himself” (Galatians 3:27).

Christian baptism probably had its origin in a custom observed by the Jews before the time of Christ. When a Gentile (non-Jew) chose to follow the true God, he underwent a baptism. The convert would stand in water while a rabbi read to him a passage from the law of Moses. Then the convert would plunge into the water as a sign of cleansing himself from the old life of heathenism.

Coming out of the water symbolized his new life as one of God’s covenant people. He “acted out” his decision to serve the Lord.

Today baptism in water is a public witness that a believer has accepted Christ and chooses to follow Him in the fellowship of a local church.

A church leader, such as the pastor, performs the baptismal ceremony. Baptism in water is usually a once-in-a-lifetime experience. However, a person who was baptized at a time when he or she was not truly converted might desire to be baptized again, to experience a meaningful baptism in place of an empty ritual.

In simple terms, baptism is an outward sign of an inner trust in Christ. It is a public confession of Christian discipleship in obedience to Jesus’ command to make disciples and “baptize them in the name of the Father, the Son, and the Holy Spirit” (Matthew 28:19).

The Bible does not say where baptismal services should be held. We recall some rather unusual services, one of which took place at the seashore. For this, we had to get special permission from the authorities. Soldiers holding their guns with bayonets fixed watched as the national pastor and I baptized converts. Seeing the candidates for baptism being put under the waves and then brought up again while people sang joyful choruses made them curious.

“What kind of ceremony is this?” they asked.

Thus the way was opened for believers to tell about their salvation and why they were following the Lord in baptism.

Regardless of the facilities, whether in a church baptistery or a river or stream, the spiritual significance of baptism and our confession of Christ are of primary importance.

In a desert area by the Jordan River, a prophet named John the Baptist preached repentance (Luke 3:1-15).

“Turn away from your sins and be baptized, and God will forgive your sins,” he said.

Many people, including tax collectors and soldiers, responded to his preaching. John’s baptism became known as the baptism of repentance (Acts 19:4).

Then one day Jesus appeared and He, too, asked to be baptized. John declined for he knew who Jesus was. He was the Son of God! He had no sin and did not need to repent and be baptized. But Jesus told John that by being baptized He would fulfill what God required, and John agreed to baptize Him (Matthew 3:13-15).

As soon as Jesus was baptized, he came up out of the water. Then heaven was opened to him, and he saw the Spirit of God coming down like a dove and lighting on him. Then a voice said from heaven, “This is my own dear Son, with whom I am pleased” (Matthew 3:16-17).

Thus Jesus identified Himself with sinful humankind, becoming an example for us all.

Baptism in the Early Church

The baptism of John served a unique purpose in preparing people to receive their Messiah (Matthew 3:1-6). It was a sign of confessing and turning from their sins. After the death of Christ baptism took on new meaning. Now, because their sins were washed away by the shed blood of Jesus, believers were baptized to identify themselves with His completed work of redemption. (Acts 22:16; 1 John 1:7). However, the water of baptism in itself can never wash away sins! Cleansing from sin comes only through the merit of Christ’s shed blood.

In the Great Commission (Matthew 28:19-20) Christ’s clear command is to make disciples. He tells His followers to do this by 1) going to all peoples everywhere, 2) baptizing them, and 3) teaching them.

The early church leaders baptized converts in obedience to Christ’s command. We read of 3,000 baptized on the Day of Pentecost (Acts 2:41). Philip the evangelist baptized the Ethiopian official when he believed in Jesus Christ (Acts 8:36-38). Ananias, a layman, baptized Saul who later became the apostle Paul (Acts 9:18). Cornelius, captain of “The Italian Regiment,” together with relatives and close friends, was baptized in water after the outpouring of the Holy Spirit upon them (Acts 10:24-48). 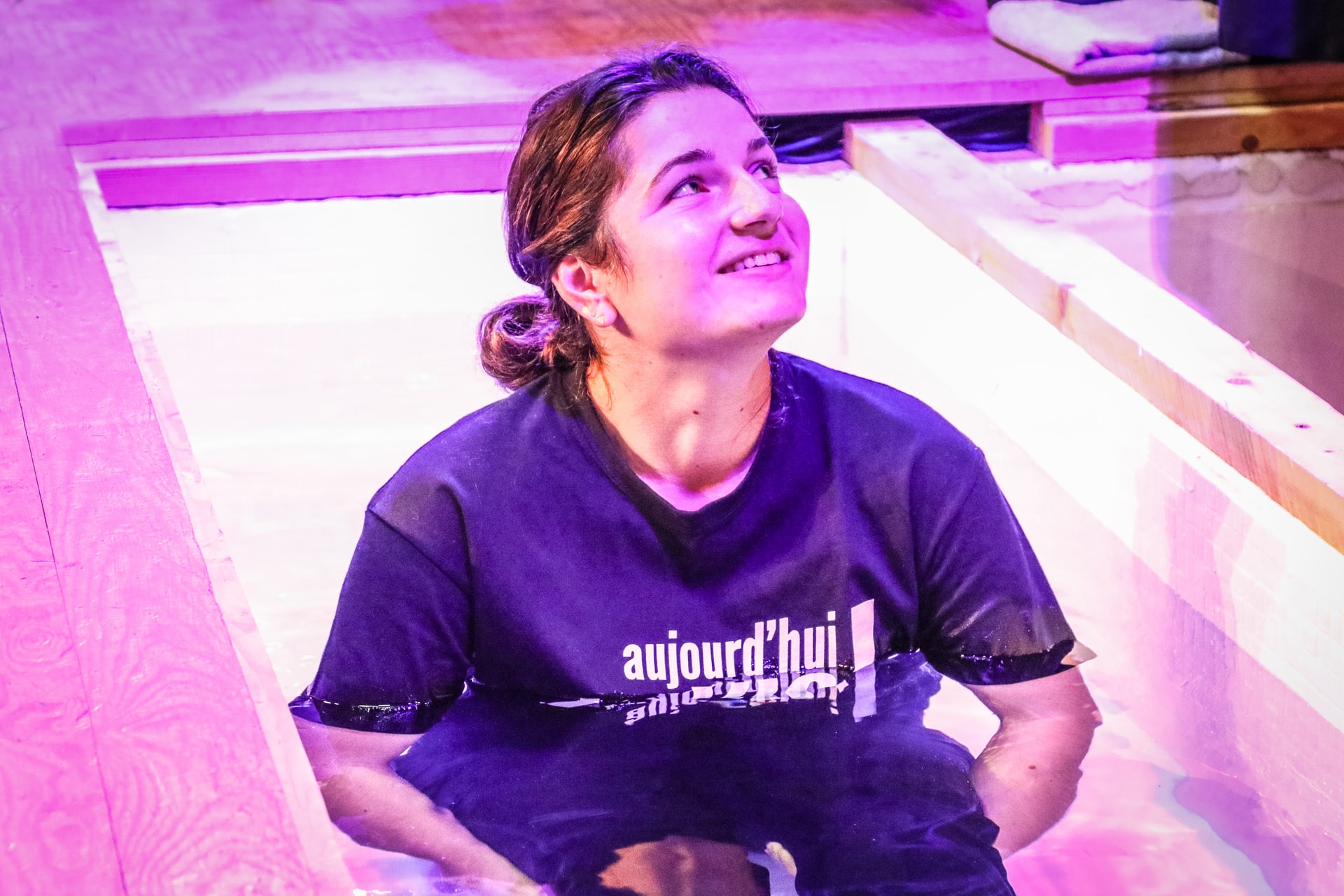 Pentecostal churches believe that immersion (putting the candidate completely under the water) agrees with New Testament teaching and practice. In some churches, tradition (and perhaps a lack of water long ago) changed baptism from immersion to baptism by sprinkling or pouring. This form of baptism, however, does not give as clear a picture of Christ who died, was buried and rose again.

A few groups who believe in immersion also make an issue of being “baptized in the name of Jesus,” because this phrase is used in Acts 2:38 and Acts 19:5. It was probably used to distinguish Christian baptism from John’s baptism and most evangelical churches do not try to build a doctrine on it. Christ’s command leaves no question: “Baptize them in the name of the Father, the Son, and the Holy Spirit” (Matthew 28:19).

Tradition also brought about infant baptism—sprinkling water on a baby to be sure he or she will go to heaven if he or she dies. But a baby has not sinned, and neither has he or she knowledge of right and wrong; he or she does not need repentance. Many believers choose instead to dedicate their children to the Lord. We shall be studying this in Lesson 8.

If you have not been baptized in water, we hope this lesson has helped you to see what the Bible teaches about baptism. As you follow the Lord in baptism, His blessings await you!