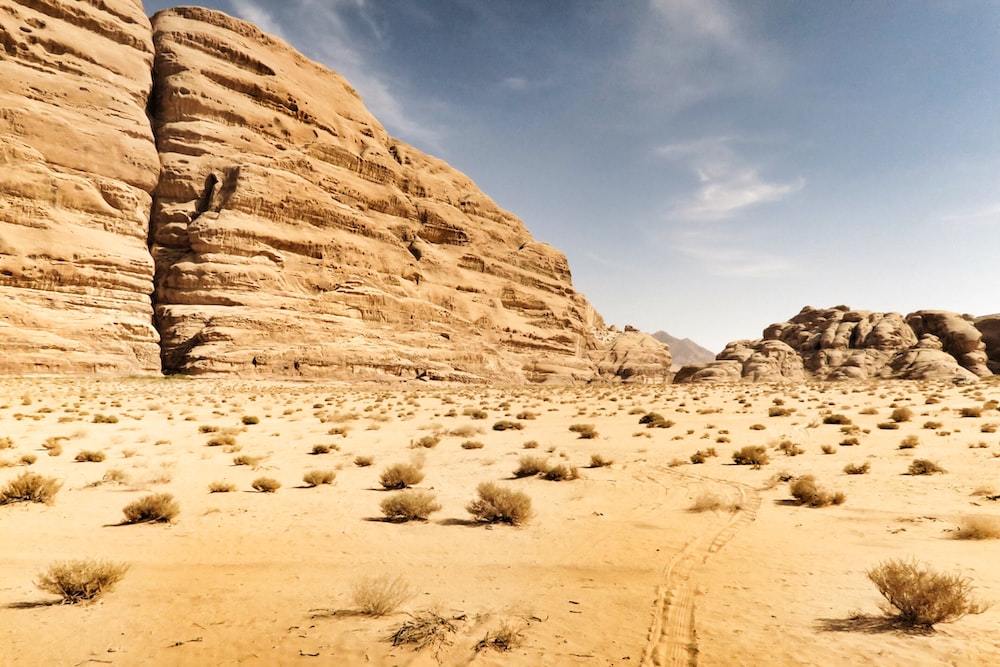 Today, I will begin a series of posts based on the words of Jesus.  We will start with what Jesus said just after He was baptized by John the Baptist and then was tempted by the devil.  Our topic is “Overcoming Temptation.”  The parallel passage is Mark 1:12-13 and Luke 4:1-13.

Jesus was a young man and was ready to embark on His public ministry.  Satan sought to destroy His ministry.  Satan often tempts people when they are beginning to do something for God.  He tries to derail God’s servants before they can accomplish His purpose.

Satan tempted Jesus in three specific ways: (1) to turn stones into bread, (2) to cast himself off the temple, and (3) to worship him.  We are often tempted in similar ways.  We will discuss each of these temptations in our coming “thoughts.”

Jesus was in the wilderness for forty days being tempted by the devil.  During these days, Satan tempted Jesus in three ways.  We will discuss the first way today.

Jesus did not eat during those forty days and became hungry.  Satan jumped on this circumstance and said: “If You are the Son of God, command that these stones become bread.”  Satan challenged Jesus to prove His divinity by performing a miracle to meet His physical need.

Under different circumstances, it would not have been wrong for Jesus to meet his need by turning stones into bread.  In this case, Satan was tempting Jesus to demonstrate who He was by performing a miracle for His benefit.  Jesus did not declare, “I am the Son of God” or perform a miracle.  Rather He responded by quoting the Word of God.  Jesus said to the devil, “It is written, ‘Man shall not live on bread alone, but on every word that proceeds out of the mouth of God.'”

The point is not that we should ignore food.  Jesus is not teaching a spirituality that overlooks physical needs.  He declared that man does not live by bread “alone.”  We certainly do require food.  He simply sets the right priority.  Obeying the Word of God and doing His Will is more important than food or any other material thing. Sometimes, we have to sacrifice something we want to do the will of God.  Most of the time, we are simply called upon to trust God to provide for our needs in His time, in His way, and with His result.

First, the devil tempted Jesus to turn stones into bread, but Jesus declared that man shall not live by “bread alone.”  Second, the devil took Jesus into the holy city, had him stand on the pinnacle of the temple, and said to Him:  “If You are the Son of God throw Yourself down; for it is written, ‘He will give His angels charge concerning You’; and ‘On [their] hands they will bear You up, lest you strike your foot against a stone.'”

Once again, the devil tempted Jesus to demonstrate that He was the Son of God by performing a miracle—the miracle of preserving His life while falling from the pinnacle of the temple.  Satan even tried to get Jesus to apply a promise from the Psalms to Himself (Ps. 91:11-12).  Jesus responded by saying: “On the other hand, it is written, ‘You shall not put the Lord your God to the test.'”  Satan wanted Jesus to precipitate a crisis and demand the fulfillment of the promise.  However, Jesus made it clear that He would not put “God to the test.”

Sometimes, we are tempted to be presumptuous in the expansion of our ministries.  It may be that we step out in the name of faith beyond where we ought to go.  There are some fine lines here.  The key is to diligently seek the will of God and to be led by the Spirit.  When we do, He will be with us each step of the way.

We have discussed the first two tests that Satan hurled at Jesus.  Turning now to the third temptation.  Satan drops his taunting about Jesus being the Son of God, but he does not give up his efforts to cause Jesus to sin.

The devil took Jesus to a very high mountain, showed Him all the kingdoms of the world, and said to Him: “All these things will I give You if you fall down and worship me.”

Satan does have temporary power as an enemy of God.  Jesus (Jn. 12:31) called him the “ruler of this world,” but he does not have outright ownership.  He rules over evil forces by permission of God.  Moreover, any control over the earth he might temporarily engender will be taken away.

Acting as though he owned the universe, Satan offers Jesus “all the kingdoms of the world” in exchange for His worship.  Both Satan and Jesus knew that the kingdoms of the world ultimately belong to God and that Christ, His Son, would be King of Kings and Lord of Lords!  The temptation was to bring this about now.  The plan of God was different.  Jesus would fulfill God’s plan as a Servant before He became king.

For the third time, Jesus responded to Satan by quoting Scripture.  This time, Jesus quotes Deut. 6:13.  Jesus said, “Be gone, Satan! For it is written, ‘You shall worship the Lord your God, and serve Him only.'”  Following Christ’s example, and with His help, we can defeat Satan with the Word of God.  In my next “thoughts” I will write a summary statement about these three temptations.

We have been discussing how the devil tempted Jesus and sought to defeat Him.  All this took place at the beginning of the ministry of Jesus.  He was about 30 years of age (Luke 3:23).  He was a young man beginning His public ministry.

The temptations presented by the devil were particularly relevant to a minister about to embark on a new ministry.  First, the devil wanted Jesus to put the highest priority on meeting His physical needs.  He wanted Jesus to sustain Himself in His ministry by turning stones into bread.  Jesus responded by putting the priority on living by the Word of God.

Third, the devil wanted Jesus to fall and worship him.  He promised to give Jesus great power and authority over the earth.  This would have been idolatry of the highest order.  Sometimes ministers are tempted to gain power by yielding to the world’s way.

The temptations involved setting the wrong priority, acting presumptuously, and a focus on power.  Although these temptations have special relevance to new ministries, we can all be tempted along these same lines.  Jesus answered each temptation by quoting Scripture.  These same Scriptures will guide us in all our ministries.