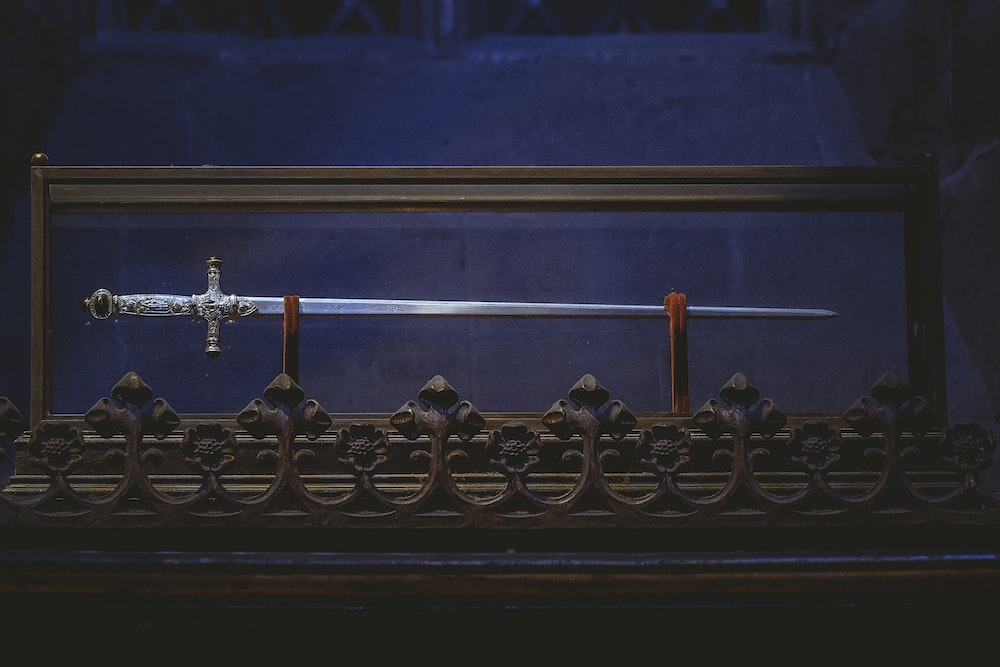 It is the last night of Jesus’ ministry on earth. Jesus and the disciples were in the Garden of Gethsemane. Judas is carrying out his murderous plot to kill Jesus. The soldiers along with officers from the chief priest and the Pharisees are arriving at the night. They came with lanterns and torches to light the way (John 18:3). Also, perhaps the way was lit by moonlight. Jesus is finished his praying, but still speaking to the disciples, and awaits briefly the coming of the soldiers.

Mark tells the story of what happened in these words. 47 But a certain one of those who stood by drew his sword, struck the slave of the high priest and cut off his ear. 48 And Jesus answered and said to them, ‘Have you come out with swords and clubs to arrest me, as against a robber? 49 Every day I was with you in the temple teaching, and you did not seize me, but this has happened that the Scriptures might be fulfilled.’ 50 And they all left Him and fled. 51 And a certain young man was following Him, wearing nothing but a linen sheet over his naked body; and they seized him. 52 But he left the linen sheet behind and escaped naked.”

When the soldiers arrived. Peter drew his sword (John 18:10) only to be rebuked for striking off the ear of the servant of the high priest. The hopes of the disciples dwindled. However, Jesus informed them (Matthew 26:53) that he could have called 12 legions of angels to deliver him.

Jesus chided the soldiers for coming with swords and clubs, then reminded them that they—in so doing—were only fulfilling prophecy. After saying that all the disciples fled, Mark focuses on a young man who was following Jesus. No one knows for sure who he was. Clad only in a linen night cloth he followed Jesus and the soldiers. The soldiers attempted to capture him, but he left the linen cloth and fled from them naked.

For the next few days, my thoughts will be about the theme of “Running Away Naked.” Although Mark does not comment on this theme, I will use the theme aphoristically to deal with the spiritual “nakedness” that many experiences. Multitudes of people are spiritually naked. They can overcome this spiritual nakedness by turning to Christ.

When the soldiers came to capture Jesus in the Garden of Gethsemane, a young man left the linen cloth that he was wearing and ran away naked. This will be my theme as we talk about the spiritual nakedness of many people today.

Our Network211 website entitled https://journeyonline.org/answers/ deals with major problems that people have. I have selected three to discuss in this short series. These problems are emptiness, guilt, and death. Most people, if not all, have experienced some measure of these problems. Today, our thoughts turn to the emptiness that people experience.

Modern life testifies to this emptiness, but the feeling of emptiness is as old as a man without God. Solomon, mired in sin and despondent, wrote the book of Ecclesiastes. He asked, “What advantage does man have in all his work which he does under the sun?” (Eccl. 1:3). He had tried pleasure, laughter, great works, and a search for wisdom, but He comes to the point where he states “I hated life” (Eccl. 2:17). He found that without God, all is meaningless. At the end of his book, Solomon said: “The conclusion, when all has been heard, is fear God and keep His commandments because this applies to every person” (Eccl. 12:13).

When people reject Christ and try to live without Him, they are “running away naked” from the One who can fill their lives with purpose, meaning, and fullness of meaning.
God’s purpose for us is to grow up into the full stature of Christ (Eph. 4:13) and to bear fruit (John 15). We are to be like Christ and to perform greater works than he did, although in His name.

Unfortunately, we as believers also can feel a sense of emptiness. Fortunately, by turning to Christ, we can be filled with a sense of purpose and meaning. We can glorify God by the way that we think and live. Instead of running away naked, we can be clothed with the full armor of God (Ephesians 6:11). Emptiness will be overcome by fullness!

When Jesus was captured in the Garden of Gethsemane, the soldiers sought to arrest a young man who was following Jesus. The young man escaped, leaving behind the linen cloth that he was wearing and running away naked. Our “thoughts” have to do aphoristically with “running away naked” spiritually.

One of the great problems that people face is a sense of guilt over their actions. Some psychological theories try to do away with guilt by blaming everything on heredity and the environment. However, personal responsibility is still a part of our lives.

Sometimes people feel guilty over their actions, whether they are guilty or not. Guilt can be an unbearable burden. Judas knew that he had sinned, but he refused the avenue of repentance and grace. Instead, he went out and hanged himself (Mathew 27:5). In contrast to this, David repented of his sin and shed bitter tears of remorse. He cried out, “Wash me thoroughly from my iniquity and cleanse me from my sin” (Ps. 51:2).

The world tries to solve the problem of guilt by destroying standards. God sets the right standards, forgives our failures, and provides the way to live correctly. The former group is running away spiritually naked. The latter group comes to Christ in repentance and faith. As a result, they become clothed with His righteousness.

As a result of Christ’s sacrifice, all guilt is washed away in the lives of those who believe in Him. The apostle Paul said, “Therefore there is now no condemnation for those who are in Christ Jesus. For the law of the Spirit of life in Christ Jesus has set you free from the law of sin and of death” (Romans 8:1-2). When we are clothed in His righteousness, we can live humbly and gratefully without guilt.

A young man followed Jesus in the Garden of Gethsemane. The soldiers came and captured Jesus. They tried to arrest the young man, but he left behind the linen cloth he was wearing and ran away naked. In a spiritual sense, many are running away naked today. Today, we will apply this to our approach to death.

Job asked the timeless question, “If a man dies, will he live again?” (Job 14:14). This question has been asked through the ages. Many are short-sighted and do not think of death. However, the time comes for all of us when we need to squarely face the fact that “it is appointed for men to die once and after this comes judgment” (Hebrews 9:27). Unfortunately, multitudes of people reject Christ and the hope of eternal life. They are spiritually running away naked from Christ.

The Bible says, “The sting of death is sin, and the power of sin is the law; but thanks be to God, who gives us the victory through our Lord Jesus Christ” (1 Corinthians 15:56-57). Without Christ, we are not clothed with righteousness, but in Him, we are made righteous. Consequently, we can look forward with confidence to living with Christ in life beyond the grave.

In my next “thoughts” we will discuss the way that God empowers us with His Spirit. Our new life in Christ is filled with doing His will. For next time please read Luke 24:49 and Judges 6:34.

In the Garden of Gethsemane, the soldiers came to capture Jesus. While there, they sought to arrest a young man who was following Jesus. The young man left his linen cloth and ran away naked.

We have applied this thought to three great problems that people have when they run away spiritually from Jesus. They often feel empty, feel guilty, and fear death. In Christ, all of these conditions can be overcome. We can put off our spiritually “naked” life and put on Jesus Christ.

Moving to the New Testament, Jesus met with the disciples on resurrection Sunday night and said: “And behold, I am sending forth the promise of My Father upon you, but you are to stay in the city until you are clothed with power from on high” (Lk. 24:49). The disciples will be “clothed with power from on high.” Instead of being spiritually naked, they will be clothed with the Spirit. As a result, they will be witnesses (Acts 1:8) throughout the earth.